The Friend of NYSOMA award was established by the NYSOMA Board of Directors to honor the service of individuals who, through personal action, demonstrate in an extraordinary way, those social values affirmed to the goals of New York State Odyssey of the Mind.

The recipient this year is Arlene Sampson. 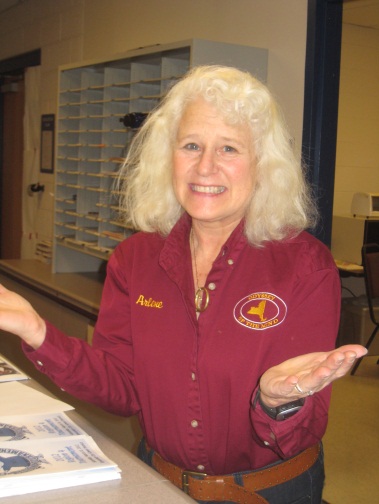 Arlene is completing her 10th year as the Regional Director for Questar III BOCES.  She has a naturally effervescent personality but when it comes to Odyssey of the Mind, she bubbles over the top!  She loves all things Odyssey, especially the mascot!  Arlene brings that excitement and an attention to detail to everything she does with the Odyssey program from membership development to trainings to tournament details.  Moreover, she does it with a positive attitude and enthusiasm that embodies the Odyssey spirit of creative problem solving.

Over the past ten years, she has worked tirelessly to grow the program in her region.  She has shown special dedication to participation in the Primary problem with as many as 12 teams competing this year.  Additionally, the number of participating teams in her region has increased despite the large number of local school district budget cuts, in part due to Arlene’s enthusiasm toward growing the program.  Several independent schools now compete in her region because Arlene reached out and assisted with program development.  A shining example of her work with school districts is the Troy City School District.  Arlene has worked with them over the past 3 years, nurturing the program and encouraging involvement in the regional tournament.  This year every school in their district has competing teams totaling 15 teams, the most of any district this year!
Arlene has actively worked to improve the tournament experience for all everyone.

As an out-of-the-box thinker herself, Arlene encourages other people to think that way.  Last year a high school volunteer wanted to create a game for this year’s tournament.  Arlene gave him the thumbs up and he built “OMER’s Challenge” (a game involving teamwork) which debuted at this year’s tournament.  Arlene further supported his idea by using her artistic talent to paint OMER and SNYPS on the game.
While many of the things that Arlene does are part of her Regional Director responsibilities, she clearly goes above and beyond and motivates others to do the same in support of Odyssey of the Mind in New York State.  Over the past ten years she has not only attended state tournaments to support the teams from her region, she has volunteered to help out during the day by working in sales or the creativity booth,  assisting with pin developments ideas, helping with preparing and presenting tournament awards, etc. She is always willing to go that one extra step.

NYSOMA is pleased to award Arlene Sampson the Friend of NYSOMA Award in recognition of her exceptional contributions to the Odyssey of the Mind program.