The Friend of NYSOMA award was established by the NYSOMA Board of Directors to honor the service of individuals, who through personal action, demonstrate in an extraordinary way, those social values affirmed to the goals of New York State Odyssey of the Mind.  The inscription on the plaque reads: “In recognition and appreciation of unique talents and creative energies offered on behalf of NYSOMA.”  This year’s recipient is William Everett. 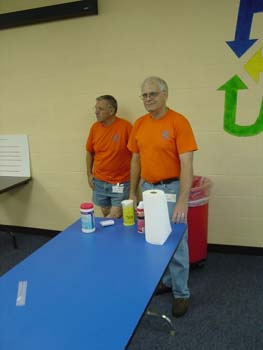 Bill’s involvement with NYSOMA started in 1984 as a coach for his son’s team.  It is hard to think of an Odyssey role Bill has not assumed.  In addition to coaching, Bill has devoted his time to Problem I, the vehicle, as a judge, a Regional Problem Captain, and an Assistant Problem Captain at the State and World level.

Bill has also supported the Spontaneous program by helping with set up at the regional and world levels as well as with the NYSOMA Spontaneous Camps for many years.  Bill’s home region is Region 14 but you will find him helping out at Regional Competitions across the state.

Bill was a NYSOMA Board of Director’s member for 11 years.  During that time he served as Secretary of the Board, Historian, and chairman of the Scholarship Committee.

Bill is a strong believer and supporter of the creative process promoted through the Odyssey of the Mind program.  He is employed as a facility engineer in the food processing industry, where he uses Odyssey principles at his work place. Because of his Odyssey enthusiasm, he has been able to recruit numerous coworkers as Odyssey volunteers.

NYSOMA proudly recognizes and congratulates William Everett for his service and dedication to the Odyssey of the Mind program.